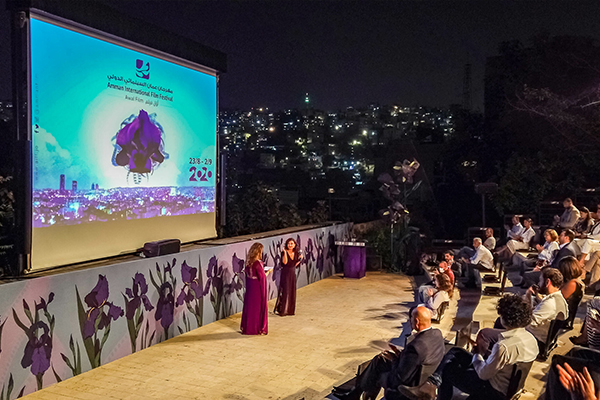 Amman International Film Festival – Awal Film has announced winners for its 2020 edition, amidst unprecedented circumstances, and in the absence of the participating filmmakers, jury members and guests from abroad due to travel restrictions.

The jury, composed of Srdan Golubovic, Saba Mubarak and Sarim Fassi-Fihri, granted the Black Iris Award for Best Arab Feature Narrative Film, along with a cash award of US $20,000, to You Will Die at Twenty by the Sudanese director Amjad Abu Alala. A Special Mention in the same category went to the Saudi Film Last Visit by Abdulmohsen Aldhabaan.

In the Documentary section, the Black Iris Award for Best Arab Documentary went to Ibrahim, a Fate to Define by Lina Alabed. The Jury was headed by Andrea Luka Zimmerman and including Mahmoud Al Massad and Nadia Kamel. The Palestinian director received a cash award of $15,000, in addition to the Black Iris trophy.

The Egyptian documentary The Profession by Ramez Youssef received the Jury’s Special Mention for its “very daring topic, leading us to the hidden world, into the depths of society through the belly dance profession that is very hard to reach.”

Huda, a Jordanian short film directed by the first-time director May Al-Ghouti, got The Black Iris Award for Best Arab Short and received the cash prize of $5,000.

The Special Mention in the same category went to the Iraqi Short Soul Return by Muhannad Al-Tayeb. Soul Return as the Jury said “is a film that beautifully and hauntingly reflects the horrors of war. The message of this thoughtful film reminds us of the power of short-form storytelling.”

The audience voted for its favourite international film, made by a first-time director. Gaza, a 2019 documentary by Irish filmmakers Garry Keane and Andrew McConnell and portraying the everyday life of Gazan citizens was granted an award of $5,000 in addition to the Bronze trophy.

The closing ceremony was held at The Royal Film Commission – Jordan in the presence of Princess Rym Ali, President of the Festival, and a very limited number of guests, in line with social distancing regulations.

These same safety rules have forced the festival to adapt its screening setup by showcasing 39 films in three newly established drive-in cinemas and one open-air theatre while rescheduling some of its screenings to respect new curfew hours.

At the awards ceremony, the Juries – made up of Jordanian, Arab and international professionals – announced the winners in recorded statements, followed by the screening of Luxor by the Jordanian-British director Zeina Durra. The ceremony was presented by the Jordanian artist Zain Awad and live-streamed on the Facebook page of the festival.

The festival’s programme managed to maintain its previously planned content in its entirety and most screenings were sold out.

Commenting on this unusual inaugural edition, the President of the Festival, Princess Rym Ali, said: “There were films of high quality in competition and I congratulate the recipients of our Black Iris awards, though I am sure it cannot have been easy for our professional juries to reach a decision. I am grateful to them and excited for the filmmakers that participated in this Festival and its activities and I am extremely proud that the Festival’s team produced such a seamless event. The positive response from the audience tells us how important access to film culture remains at all times.”

The Amman Film Industry Days concluded on August 26, and nine projects in development or post-production were granted in-kind and cash awards in the value of $68,500.